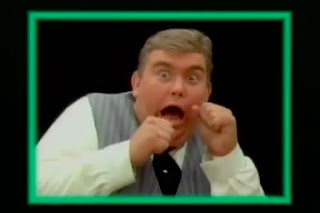 Soooooooo finally I got to see the new Ghostbusters film, I couldn't go to the cinema when it first came out as for the past three weeks I have been staying in the most beautiful manor built in the 1500's - on my own! My imagination spooks me enough I certainly didn't need to fuel it with anything else (yes I know it's a 12 rating but still...)

"What's this got to do with John Candy?" I hear some of you cry! Well it's no secret John was going to be in the original Ghostbusters, however he had a disagreement with director Ivan Reitman on how his part should be played. John was originally going to be cast as Louis Tully (later played by his friend Rick Moranis), but they couldn't agree on the type of character Louis was going to be. John wanted to play the character as a German that owned several dogs, however their visions didn't really meet so John decided to pass. He was however in Ray Parker Jr's Ghostbusters theme video.

Strangely enough there were many roles that were meant for Candy and were cast to Moranis and vica versa, although they are physically very different, they worked quite similar and according to Mel  Brooks when I interviewed him,  both were great at "Comedia dell'arte".

Fast forward 30 years and Paul Feig, director of the 2016 Ghostbusters reboot, got so many references in for old school fans of Ghostbusters, SCTV and SNL. Harold Ramis' (RIP) bust was in the University, Dan Aykroyd, Bill Murray, Ernie Hudson, Sigourney Weaver and Annie Potts all make cameos. What I loved most was the two John Candy references, the un-apologetically offensive, short fused Dean Thomas Shanks (played by Steve Higgins) at the Kenneth P Higgins Institute was a homage to John Candy's character Tommy Shanks, Mayor of Melonville in SCTV, he even chases them out of the building with a baseball bat. Also Abby, played by Melissa McCarthy, says the line "that will leave a mark" a nod to John's character Mog in Spaceballs, a line that John ad-libbed and Mel Brooks kept in. I love the fact so many years after the original came out, John was not even part of the film and yet his spirit and influence sneaks into the reboot.

With regards to the book I am getting my head down. I have a surgery date now for 22nd of this month which is hopefully going to take the chronic pain away (or at least relieve it for a bit) and fingers crossed take away the chronic fatigue and brain fog that pain brings with it. I do have a release date in mind but until I know for definite I daren't announce it.

PS Who ya gunna call?
PPS I now want to be Kate McKinnon with a proton pack
Posted by Tracey Morgan at 13:28