Planes, Trains was on TV last night and I never tire of watching it. This film makes me laugh out loud, snigger and smile like a Cheshire Cat, but it also never fails to break my heart. Watching Del Griffith talk about his wife with such love... "Love, love isn't a big enough word" to then find out at the end that she passed away eight years ago (yeah OK I knew it was coming but it still gets to me every time). 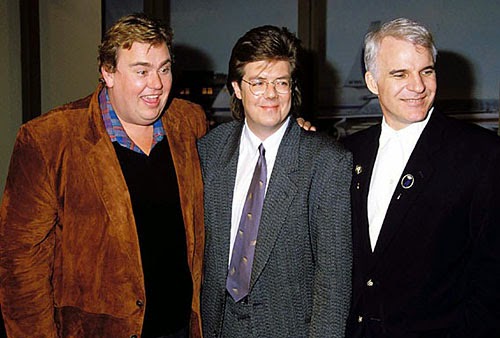 I was recently very lucky to interview Howard Deutch who directed John in The Great Outdoors. Not only did he have some lovely memories of John and anecdotes from the movie, he was able to tell me a lot about John's relationship with John Hughes, their love for each other and how John Candy was a muse for John Hughes' work (Candy is in eight
of Hughes' films, he worked with him more than any other actor). Hughes had a love for characters who didn't quite fit in, the underdog - and Candy was brilliant at playing them.

I know from talking to John's old friend Jonathan O'Mara that John often despaired of his weight and feared that he would never be normal and I think this gave him empathy with those characters he later brought to life.

Anyway I digress... this weekend one of my close friends got married to one of my old friends (I introduced them) and the love in the room not only between them, but friends and family too was palpable.

This made me think of John and how Tony Rosato described to me how John was so excited "like a little kid" on his own wedding day. Watching Del Griffith last night, I am sure every time he talked with such love in his eyes about his wife that John was thinking of  his true love Rose Candy (nee Horbor) whom he married in 1979.

Recently I also know of relationships that have been sacrificed for career. As I get older I learn more and more how love is the only thing we should aspire for. So for today, Del's words of wisdom ring true more than ever (and it works vice versa).