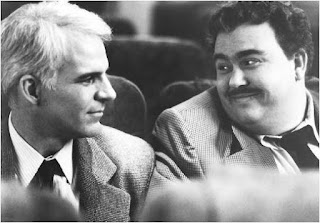 Happy Thanksgiving to all our friends that are celebrating!

Below is a selection of edited excerpts from the book - just as a wee teaser.   A big thank you to Joe Shooman, Rhys Perry and David Morgan for all their help!

Sending you all lots of love as always,
Tracey xx

PS I know what I'll be watching this evening

Planes, Trains and Automobiles writer John Hughes had such a knack for creating scripts that would reach into your soul, it’s like he had a pair of x ray specs that could see what made people tick, every nuance, he could just get into people’s heads and hearts. He then took those scripts and matched them with the perfect cast, who, he would then encourage to make the script their own. Candy always found that fascinating, the scripts were tight enough in his eyes, but the true glimmers of humanity - the bits that made the whole film truly believable, were the improv moments that caught everyone off guard, including the improviser.

I learnt something recently, in fact my counsellor, Michael pointed it out to me. The friendliest, smiliest, most tolerant people - the ones that laugh and joke and are constantly looking on the brightside, are masking deep pain, they have been to hell and back. One of the most complex and sweet characters John ever played was Del Griffith, to anyone who met Del briefly he was a happy go lucky salesman, overly chatty, generous and a little annoying.

“The last thing I want to be remembered as is an annoying blabbermouth... You know, nothing grinds my gears worse than some chowderhead that doesn't know when to keep his big trap shut…” - Del Griffiths

****
If you can find the original Planes, Trains and Automobiles script (and it is out there in the ether), you can see how the characters are portrayed exactly as Hughes wanted, but both actors (Martin and Candy) added a little something of themselves too. Hughes always encouraged his actors to improvise, in fact they would finish the scene and not hear the words ‘cut’ so they knew they had to keep going. [...] Hughes had so much footage that the initial cut was four and a half hours long, I would have so loved to have seen that, a lot of comedy gold must have ended up on the cutting room floor. You can actually find one deleted scene on YouTube where Del and Neal are eating their in-flight dinners, it’s hilarious, I have no idea why it was left out.

Candy really found his acting chops in this film, it’s up there with some of his finest work and he never fails to make me laugh and cry, no matter how many times I have watched his performance.

Del’s s speech after Neal has laid into him at the hotel room was just magnificent, the hurt in Candy’s eyes, the way he delivered his lines, “You wanna hurt me? Go right ahead if it makes you feel any better…” was worthy of an Oscar. If you aren’t already completely in love with Candy, it’s moments like this that make you fall for him. 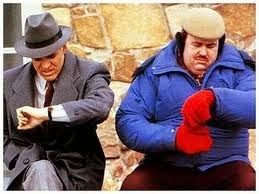 From all the extra footage Hughes filmed, a 10 minute short was also created, from the ‘Doobie’s Taxiola’ scene. Larry Hankin who played Doobie, told me;

“I revered John (Hughes), I was very happy to work with him, he made great movies and this guy knew ‘funny’. He was watching me and John (Candy) hang out and riff, so John Hughes set aside a whole afternoon of me, John and Steve Martin to work in the cab. The cab was set up on rockers in a garage, we weren’t really driving around. When we shot the scene in the cab, the actual scene you saw in the movie took an hour to shoot. But then he sent everybody home expect a very small crew, the cinematographer, the sound guy, him, Steve Martin, me and John.

“So for the rest of the afternoon we improvised in that cab for hours. It was really great because John and I were (from) Second City, so we were great at improvising, we were just playing together. We must have improvised for three hours just inside that cab. He (Hughes) was watching on the screen and he would come down and would just watch all three of us improvise and he would sit on this orange crate outside the cab, and he would say ‘remember Steve when you said that? and Larry, you said that, and John you answer…’, I was like this guy is incredible he has a photographic memory. So that was just really cool, I got to riff with two of the heaviest guys in comedy, for hours! None of that stuff ever appeared in the movie. “

The wonderful “those aren’t pillows scene” in the motel room was not in the original script, Candy had a similar experience with Jonathan O'Mara when they went to Buffalo as teenagers for John to apply for the Marines, O’Mara said it was so close to their experience “John must have influenced the scene”. John remembered in interviews that this scene took forever to film, Hughes would say things like “just kiss his ear”, by the time the two leads had stopped corpsing the camera would then start to shake, it took an eternity for everyone to get through it.

Another great scene was between Martin, Candy and Martin Ferrero who played the motel clerk at the El Rancho Motel, ... Ferrero was only on set for a day to film that scene and told me about meeting Candy;

“When I went on set that day, John was chatting with all the crew and he was on set practically all the time, talking to people and being very outgoing. He welcomed me in, he said ‘I know we are working together’. Steve Martin wasn’t on set a lot, he would do his part and then go back to his trailer.

“When I saw Steve and John work that day I noticed there was no improv at all, they didn’t improvise, they stayed on the script and I asked him about it, John said “No we don’t do a lot of improv because John Hughes has written a script that is pretty tight and there is a rhythm to what he has written, if you were to begin to improvise you might waste a lot of time, it might be funny but you might be upsetting the rhythm, it’s a heartfelt important movie and you need to stay on course.”

(NB from author. It always makes me chuckle that the two leads were trying to speed the process up half way through, they were so behind schedule I suspect they were trying to keep their director on track).

This is a selection of edited excerpts from the forthcoming biography, Searching for Candy by Tracey J. Morgan. 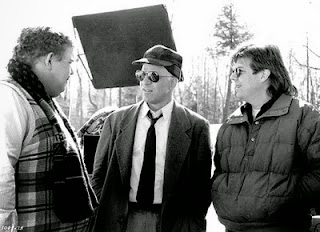