No Guts No Glory

Is this really my first blog post of the year? I'm ever so sorry, I'm writing on my personal report "must try harder". It's not that I haven't been meaning to, it's just sometimes I fear I risk repeating myself. However, there is a new topic in town that I've been thinking about, not my town, but in a town not too far from here. John Candy fan, Ryan Reynolds (Deadpool) is now the co-owner of Wrexham Town Football Club, alongside his partner Rob McElhenney (It's Always Sunny in Philidelphia). It's a huge coup for British football and certainly for Wrexham itself who are very much the underdog.  The excitement is palpable - even I, not a football fan, am very excited to see where this goes, it's more than football, they are creating a dream to chase, and what is more wonderful than that? 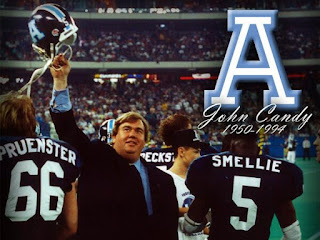 So what does this have to do with John? Well to me it has so many similarities to the time when John Candy co-owned the Toronto Argonauts. In 1991 John Candy, Wayne Gretzky, and Bruce McNall bought the Toronto Argonauts, and John completely emersed himself into the role.  Not only would they sign the highest paid footballer that the US and North America had ever seen at that time, Rocket Ismail, they would go on to win the CFL Grey Cup that year, lift every blackout and rejuvinate the whole of the CFL. John was a huge part of this, he put so much of his own time and money promoting, he blew the budget on the opening game that year getting his pals on stage including Dan Aykroyd and Jim Belushi as The Blues Brothers, he made it exciting again. John would stand at the side of the pitch, all he had to do was lift an eyebrow and the whole stadium would errupt. He put the passion back, he put the hope back and he put the entertainment into the league.

I think Reynolds and McElhenney are going to do the same and it is exciting.

It has taken every bone in my body not to drive to Wrexham and hunt down Ryan Reynolds to give him a copy of my book, so I sent him one instead C/O Wrexham TFC. Rhys Perry my partner in crime ran to the post office yesterday with me shouting "RUN Charlie, run as fast as you can!" after I had kissed the parcel for luck, (luckily Rhys came back, I wouldn't have blamed him for leaving). Just that in itself made me feel like a teenager again. I may never hear back, but for a moment there was hope and for a moment it was a possibility.

Hope. We all need more of that don't we?

I hope you're all keeping well.

Sending you much love,