Something else me and John have in common...

Rejection. John hated it, I hate it. 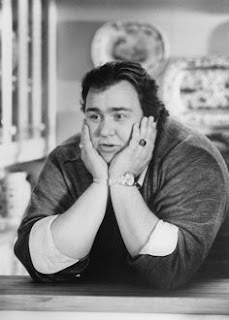 Lorne Michaels of Saturday Night Live once went to see John, Dave Thomas and a couple of the other Second City troupe members perform live, basically to suss them out for SNL. John had hoped Michaels would like their show but for whatever reason that night, probably down to nerves, they didn't do a great gig and as a result was told by Michaels "Not to give up the day job". Thomas shook it off but it hit John hard, really hard, he always wanted to be good at what he did and he saw this as a really messed up opportunity. Luckily for John, Michaels was wrong. At that time though it didn't stop the hurt and doubt in John's head, luckily he got over it and carried on, and well the rest is history.

This week I have been knocked for six. I keep telling myself no one has died, I have a roof over my head, food in my belly and love in my life, however, I feel like shit.

About six weeks ago I had an email from a senior editor of a large publishing company in New York, saying they were a massive fan of John Candy, they had heard about my project and they wanted to chat on the phone. Now for a long time I had resigned myself to self publishing but this interest gave me a real shot in the arm, did I dare to dream? We spoke for around half an hour on the phone and I really liked this person, they were truly a fan of John's and that made me feel extremely comfortable with them. I sent them some work, they enjoyed it and agreed to sign a non disclosure agreement to read more, luckily my lovely friend and lawyer, Bill Govier jumped into action (thanks Bill), the NDA was signed and I sent more of my work. I waited and waited (well for as long as I could, I have no patience whatsoever), I had been told by other published friends that the editor would have to take it to an editorial meeting basically where Sales and Marketing look at the work and decide whether it's something they could sell. So this week I heard back, a very sweet rejection email stating that I shouldn't give up, they continued to enjoy my pages, they want a copy of it when it's finished, but it is basically a love letter to John and there is not enough nuance. Sigh. Thing is I did dream, I dreamt I was about to get a very experienced and well established editor and publishing house on board, that they would help me do John justice and that I could refund all the people who have pledged on crowdfunder. So guys it's back to the old plan and I am really sorry, I wish I was better, but I figure John is good enough for the both of us.

I'm now licking my wounds and acknowledging I need a much thicker skin, just like John I will carry on and hope I get a fraction of the success he did, mainly so I know I have done a good job for him. So I guess the message from this blog is, it's OK to dream, it's OK to feel sad when things don't work out but it's not OK to give up, so I'm down but never out.

PS John later featured on three episodes of SNL as a guest, he turned down the opportunity to become a regular on season six of the show in favor of staying on SCTV. Touche John, touche.
Posted by Tracey Morgan at 12:26 10 comments: