Things you may or may not know about John Candy...

I haven't wrote a blog post in a while as I am not too well at the moment and pain is giving me writers block. So here are just a few Candy facts that you may or may not know...

1. John was scared of the bear in The Great Outdoors, he had to do a scene where the bear was chasing him for 15 seconds so they could get the shot. There was no CGI in those days and he probably never ran so fast in his life!


2. He was kind, courteous and sweet to everyone he met. Many times John would go to a restaurant and end up in the kitchen helping the staff and serving customers.

3.  John was originally going to play the part of Louis Tully in Ghostbusters, he pulled out due to character portrayal differences and the part was rewritten for Rick Moranis.

4. He wanted to be a footballer not an actor, but due to a knee injury he could never be a professional. Later on in 1991 he did however become a co-owner of the Toronto Argonauts, something he always dreamed of.

5..During the horse riding scenes in Delirious John's parts were filmed using a mechanical horse.

6. Planes, Trains and Automobiles was written by John Hughes in a weekend, the original cut was over four and a half hours long. I have only ever found one deleted scene, I would have loved to have seen the others. (You can see that deleted scene here https://www.youtube.com/watch?v=jgg_vWq7KNk)

7. John had a Golden Retriever called Keema, whom he studied for his part of Barf in Spaceballs.

8. John Candy and Conrad Dunn taught their co-stars in
Stripes the words to Do Wah Diddy Diddy as nobody else knew them.

9. John filmed his scenes for Home Alone as a favour to John Hughes. He worked solidly for 24 hours to film them all and got into trouble several times with Chris Columbus for encouraging The Polka Band to play when they should have been filming. 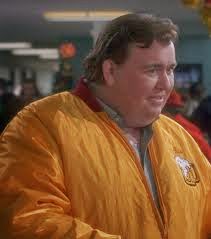 10. The death of John Candy was one of the reasons that John Hughes left Hollywood.

Oh and not a John Candy fact as such but one related - Sanka's egg was made of rubber!

I will write a much bigger blog post soon.

Thanks for all your support,
Tracey x