Why John Candy was (and still is) funny.

I discovered John Candy in my childhood. Splash was my introduction, swiftly followed by Brewster's Millions (thanks to my brother Dave who watched it religiously most weeks when we were kids).

I loved John and his characters then as much as I do now. He has always managed to crack me up and likewise have me blubbing like a baby. Two of my god children, Jake and Macy, love Uncle Buckle as they call him. John appeals to so many age groups, his humour is universal and timeless.

So what makes John so funny?

I think his down to earth character, the fact that he often played the underdog that we could relate to and root for. He seemed to put a bit of himself in each role he played, making everyday occurrences funny by focusing on the small details that we could all recognise in our own lives. A look, an expression, a movement or a line - he had it all and on top of that he was a great dramatic actor.

John loved people, all types of people, if you were nice to him then he was nice to you. He listened and was interested and it didn't matter who you were. By getting to know people he knew what made them tick, the key to making his characters so human. As Mel Brooks said "Life literally abounds in comedy if you just look around you".

He was also a very generous actor, all those that I have interviewed have told me how he didn't ever try to steal the limelight, he always saw the film as a team effort and would do what ever was best for the picture. 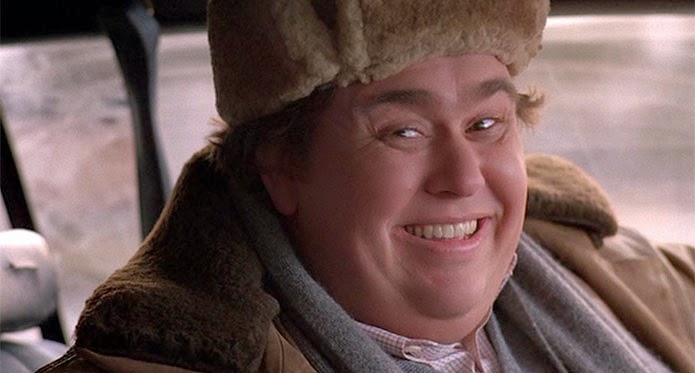 John was extremely quick and thanks to his training at Second City he was perfect at commedia dell'arte. In many of his roles such as Planes, Trains and Automobiles, Uncle Buck and Spaceballs, when he was allowed to improvise he was second to none.

I think one of the biggest things that made John so funny (no not his size he was funny regardless) was that he really enjoyed laughing. He had a huge imagination and an even bigger heart.

I interviewed Jon Turtletaub (Director of Cool Runnings) who told me "John wasn't one of those funny guys that was really 'on' all the time. A lot of these guys are always performing and they are not the ones that make the great actors. The most impressive thing for me about John was he was the only hilariously funny famous person who laughed at other peoples jokes. You don't see that in comic geniuses, they either don't react at all or they smile and say "that is funny", but he would delight, laugh and enjoy and make other people feel funny and that is such a gift to give people.

I think so many of his big films worked because of his warmth and generosity to his co-stars and his compassion to others. I know not every movie John was in was critically acclaimed but I do believe that he made every picture better and surely as an actor, that is all you could hope for.

Plain and simple John had a gift, I wish I could bottle and sell it but I can't.

He was a true one off.

Posted by Tracey Morgan at 11:52 No comments: