Cool Runnings Isn't a Racist Film - an open letter to Gary at the Wales Arts Review. 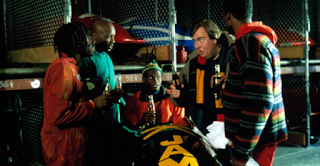 So before I get into this, it's probably best to let you have a look at an article, writer, Gary Raymond, posted last week for the Wales Arts Review, Some Notes On Blackface

Many of my friends from around the world will not of heard this story, however if you are in the UK you may have seen the local press coverage. It's kind of ironic that the classic 90's film was originally written under the working title of 'Blue Maaga' - meaning 'serious trouble' in Jamaican. As the UK Bank Holiday just passed, four Cool Runnings fans wanting to pay tribute to their favorite film, on a carnival float in Aberaeron, Wales, have found themselves in exactly that, blue maaga! Dressing up in the famous green, black and yellow colors of the Jamaican flag, they have managed to cause controversy by wearing make up to make themselves appear black. Some have instantly hailed the imitators as racist and as a result they are possibly facing criminal charges.

Gary is right, 'black face' is not acceptable. Since realising this the four fans have apologised to the original Jamaican bobsleigh team and also made a donation to their team funds.

It's good that issues like this are talked about, I think these guys hadn't realized the enormity of their actions and certainly hadn't meant to offend anyone. I was interested in what Rawle D Lewis who played Junior in Cool Runnings thought about this story;

Lewis said "This is unfortunate. I don't think these guys had any malicious intentions. This was probably a childhood movie they grew up watching. They simply wanted to portray characters they idolized growing up. Unfortunately black face conjures up a horrific and painful time in history for people of color. I truly don't believe that their display was one of mockery. The black face thing just triggers a lot of people in a negative way. It's a lot like hanging a Buddhist swastika from the rear view mirror of your car. People tend to think Nazi not Buddhism".

Lewis added "The only crime is that none of these fools look convincingly black or Jamaican!".

So hopefully some of us have learnt a lesson, 'black face' is not OK, people still make mistakes, it's good to educate not vilify.

But Gary doesn't leave his article there... he goes on to say that Cool Runnings is actually a racist film. I'm sorry what?

"But let’s just get something out in the open. Cool Runnings is a racist movie. The racist blackface carnival float was paying tribute to a racist movie. If ever you are having trouble figuring out where you stand on the Aberaeron controversy, run that sentence through your mind. If you still don’t think there was anything wrong with it, you’re a racist."

Erm no Gary, Cool Runnings isn't a racist movie and I'm not a racist for thinking that.

"A group of friends, portrayed as black stereotypes throughout, each of them parochial, idiotic, lazy, sexually animalistic, products of an endemic island drug-culture, are catapulted to Olympic glorious failure by washed-up white guy John Candy. As a comedy the movie does not miss an opportunity to deal out gags based on the racial stereotypes that have been pushed around the world for centuries by… wait for it… Blackface."

Change 'parochial, idiotic, lazy, sexually animalistic, products of an endemic island drug culture' to four guys with a range of backgrounds, all tenacious enough to train and enter for a Winter Olympic sport when they come from a small Caribbean island that never sees snow (that's the joke and also the brilliance). Derice is hardworking and respectful, Sanka fun and dedicated, Junior is sweet from a privileged background, Yuul is hard and focused. No one takes drugs in the film, there are no drug references what-so-ever. Likewise they do not come over as sexually animalistic. It's Disney film!

"The real question here is: why is it a comedy? Think of all the great sporting biopics and then pick out the comedies. I can’t think of one."

Well originally Gary, it was going to be a serious film, it was floating round for years before it was taken up by Disney. But whilst we are talking of great sporting biopics that is a comedy - here is one, 'Eddie the Eagle'. I think we both know that Cool Runnings was only very loosely based on the original Jamacian bobsleigh team and the rest was Disney-fied.

"It is a comedy because those who conceived the movie thought the idea was primarily funny, and not a true story about achievement in the face of overwhelming odds."

Erm, well it might only be loosely based on a true story and a comedy, but I do believe it is totally about achievement in the face of overwhelming odds.

"By the end the audience is asked to believe that not only was the real life team a group of imbeciles who needed an alcoholic white guy to whip them into shape – to discipline them in both body and mind – but that there was some kind of glory in earning the begrudging respect of the Arian teams who convincingly beat them in competition. Hollywood it seems can rewrite as much history as it likes, but they couldn’t bring themselves to have the black guys win a medal. By the end of the movie the victory is in winning the respect of white people, not in having won anything else."

Woah, woah, woah sweet child of mine. Hang on a minute. These guys aren't portrayed as imbeciles and John Candy's character is not an alcoholic.  Do you know why John wanted to do Cool Runnings? Because he watched the original bobsleigh team in the Winter Olympics at Calgary and he thought their story was so amazing and inspirational that he wanted to be part of it. He took a pay cut. What pisses me off is that the writers have tried to justify in the story why John is the coach and why he was bigger than he used to be. Does it really matter? And being loosely based on the original story, they don't win a medal but they do impress everyone. In fact some of the crash footage in the film, is actual crash footage of the original bobsleigh team.

"But this is largely beside the point, as the movie is not really about the bobsled team at all. It is about the white guy. John Candy’s alcoholic wash up is the character who finds redemption, and who has the real glory in achieving his dream of gaining notoriety off the back of him civilising the savages. He also gains the respect of the Arians he is competing with, which is all he was really after. At the beginning of the film, you see, Candy’s character is so low he is essentially no better than a Jamaican. The film is about how he picks himself up in order to reinstate himself into white society. In terms of success off the hard work of black people, it’s up there with Mick Jagger’s prancing."

Am I on glue? OK this is a film about underdogs overcoming the odds, but John Candy is a bona fide movie star, he could have had a bigger presence in this film if he had wanted it but they kept the focus on the team because that is what the film was about. John Candy was a supporting role and he played a blinder, he enhanced the film, added to the relationship of the main characters all without dominating the movie. In the film the bobsled team convinced Irv (John's character) to help them, he really didn't want to, with the Disney story line, the team saved him, he helped them, it was a team effort. Where has this idea that Irv Blitzer is an alcoholic come from? Because in John's opening scene he is listening to the horse racing in a bar? Was he permanently drunk throughout the movie? Was he hiding bottles of spirits in cupboards, his coat, the bobsleigh - have I missed something here?

"I have always had a soft spot for Cool Runnings. As a twelve year old, my sister took me to the cinema to see it. I associate that film with that fond memory. I laughed. I laughed at it again the numerous times I saw it on television in subsequent years. And then one day, with the benefits of an education and what I like to think of as a critical mind, I saw the film for what it was. Does that mean when I was a child I was a racist? Well, it does, I’m afraid, albeit I could probably plead that I was both too young to have yet been educated about these things, and that I was an innocent member of a society that did and still does nurture racist attitudes. I grew up, read books, listened to brilliant people. I now recognise racism because I am less ignorant than I was when I was twelve."

Oh Gary, maybe I am ignorant? But honestly I think you've got it all wrong in terms of the film, did you watch it again before writing this article? Because I have it on in the background right now as I was worried I had missed something (and I must have watched this movie before like 40-50 times). The lead characters had to overcome adversity and animosity from their competitors. To me this story breaks down boundaries and is always a true inspiration, when I feel like I can't achieve something I watch this film and it makes me believe again, and before you start, that isn't because I think I am better than the lead characters, it's because I feel empowered by them. 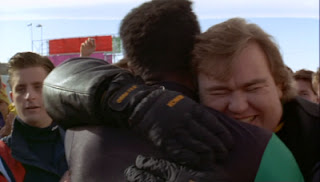 I'm really interested in hearing everyone's view on this,

Peace be the journey x

PS for anyone presently effected by the hurricanes, my heart and thoughts go out to you, be safe x
Posted by Tracey Morgan at 12:27 1 comment: