Hercules may have been in New York, but John was in Toronto

There is an aged old debate that will crop up every now and then...

Someone on social media will state what they think is a 'rare John Candy fact' that goes something like this... "John Candy's first film role was in Hercules in New York".

I hate to give it to you straight, but usually, if I reply with "I'm so sorry you are wrong, it looks possibly like an older John, but it isn't" I get a barrage of abuse.

John was only twenty years of age when Hercules in New York came out in 1970. He was fresh-faced and apart from travelling to Buffalo in 1969 with his friend Jonathan O'Mara to apply for the Marines, John never left Canada until 1973 when he was accepted into Second City and went to train in Chicago. And I presume, if the title 'Hercules in New York' is anything to go by, the film was shot in New York? Just a guess.

John's first film appearance was actually The Class of '44 released in 1973, he played Pauly, only had a few seconds of screen time, but was thrilled to be involved.

So John may not have been in New York to film Hercules, however, he certainly was many times later on in his career, including filming the taxi scene in Planes, Trains and Automobiles. Which links me nicely into my next story...

I was in New York at the end of last year. It was a complete whirlwind of a trip, I flew on a Sunday and was back in Blighty by the Tuesday! I've never been to the States before, the people were lovely, the sandwichs expensive, the pizza cheap. It was nearly Christmas, there were outdoor ice skating rings and Central Park is as lovely as you think it is.

In November I'd received an email from producer, Gideon Evans. Gideon was making a new documentary about John and wanted to pick my brains. He even asked at one stage if I would be up for an interview. I have been asked to take part in documentaries before, I turned those down, for me, I have to feel like the intention is right and I liked Gideon and where he was coming from an awful lot. So, of course, I'd be delighted to be interviewed, but seeing as he worked for NBC and was based in New York I really didn't think it would happen, just kind of a nice gesture from his side. 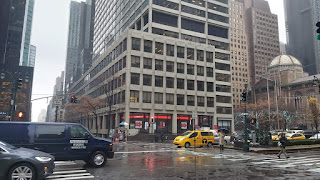 Days, weeks went by, I'd tried to not get my hopes up but I was still disappointed that it might not happen. Then I got the email, it arrived on a Wednesday I think, asking me to fly over that Sunday! Holy shit balls! Well, I'm not a good traveller, but I'm not passing up on that, I took Rhys as my Dumbo's Magic Feather.

Honestly, Gideon, his colleagues and NBC could not have treated us better - we had cars from the airport to a very fancy hotel, the day to look around, saw the streets where Steve Martin raced Kevin Bacon for a cab in Planes, Trains and Automobiles (before tripping over Del's trunk and losing another cab).

The following day we were chauffered to The Delamar Hotel, West Hartford, where filming would take place.  I even got to meet Valri Bromfield who I'd interviewed for Searching For Candy but never actually met previously, as she was just leaving the makeshift studio as I arrived.

Many other people I interviewed for the book are included in this new doc, including Juul Haalmeyer, Rob Salem, Dave Thomas, Rawle D Lewis and Jonathan O'Mara. It finally airs Sunday 26th July 2020 at 9pm ET on Reelz, John Candy: Behind Closed Doors. Apparently, I made the cut, so fingers crossed I've not made a fool of myself! 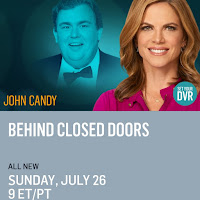 As I'm in the UK I'm not sure when I'll actually get to watch it, so if you see it before me, please do drop me a line and let me know what you think. One thing is for sure, it will be filled with love and you'll probably need to get a tissue ready.

Much love to you all!

I was sad, I still am. I'm not sure I have the right to be, but I am, so there you go. I only interviewed Mr Reiner once, it was over the phone, he was lovely and his memory perfect. His hearing was the only thing that gave any clue that he was in his elder years, either that or it was my mousey voice, a bad line, or all three, but we muddled through.

Of course, I interviewed Mr Reiner about John Candy, they had worked together on Summer Rental in 1985. Candy, in his first real lead role, directed by Reiner, was a perfect combination. Believe it or not, the film was done and dusted in just three months with budget to spare - totally unheard of in Hollywood.

Reiner inspired Candy so much, not only was he working with a genius - the man behind The Dick Van Dyke Show, director of classics such as The Jerk and Dead Men Don't Wear Plaid, he was also working with a true mensch and World War ll veteran. Reiner showed Candy the ropes of directing, so much so it was the first time Candy thought about directing for the screen himself (and he would, much later on with his directing debut, Hostage for a Day).


When I spoke to Reiner, he said the first thing that struck him about Candy was how in love he was with his family. Then he commented, "When I heard he had died I couldn't believe it, he was so full of life, how could he be dead?" Well, I know Reiner was 98 years old, but I could hear myself saying that exact same phrase, I actually thought he was going to last forever. I guess the secret to a fulfilling life is happiness, love and laughter, Reiner had that in spades.

When I first tried to contact Mr Reiner for an interview I got nowhere, I tried every contact I could find, the only thing I didn't do was tweet him (he wasn't actually on twitter when I started my search - yes I looked on and off for two years). Then, just as I was about to give up I noticed he had joined Twitter and I sent him a tweet, "I'm writing a book about John Candy, please can I interview you?", no chance I thought, but at least I had exhausted all routes. Within five minutes I had a DM from Reiner himself, telling me to contact his assistant to arrange an interview. Holy shit!

A tweet, a simple cheeky one-off tweet and I was going to be chatting to comedy royalty! Not only that, but Reiner's office also helped me get an interview with Reiner's best friend, Mr Mel Brooks! I hit the jackpot. By these two guys giving me a chance I was suddenly being taken more seriously, they didn't know me, and yet they helped me, I will be eternally grateful.

My heart is with his family and his dear friend Mr Brooks.

RIP Carl and thanks, John will be thrilled to see you.

I hope you are safe and well. These are some crazy times we are living through at the moment, be good to yourselves and each other.

With much love as always,
Tracey xx