RIP Tony Rosato, John will be thrilled to see you x 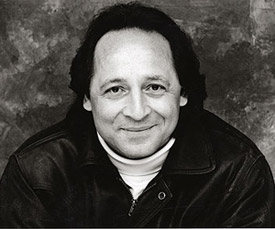 So yesterday I heard the really sad news that Tony Rosato passed away at the age of 62.

I was lucky enough to have interviewed Tony for 'Searching for Candy' and although we only ever shared an hour on the phone I fell in love with him instantly. He was a very kind, sweet and supportive man.

Tony was Italian, but grew up in Ontario, and as a child he was neighbors to Dan and Peter Aykroyd, he actually went to High School with Peter. When Tony was considering going to University in Toronto, he saw Peter perform at Second City and Peter suggested he should go into comedy. Tony ended up in the SC joining group, this is how he met John. John was there at times to help train the group and stepped in as Show Director for a while, he and Tony hit it off instantly and became lifelong friends.

Tony told me "As a director he (John) was very giving, very profound in his direction, he would always know exactly what the problem was and how to fix it. He was very gentle as a Director, very supportive he would make you feel very good about yourself whilst you were also getting ideas from him on how you could improve your performance. So he didn’t take you confidence away, but bolstered your confidence,  he kept it simple and within reach so we knew what to do. He was very free with us.

"As a friend he was very protective, very loyal, very gentle, always kidding and a little bit cheeky, but always supportive."

Later John and Catherine O'Hara pushed for Tony to become part of the Second City Toronto's main troupe and also John and Joe Flaherty got him onto SCTV.

In 1981 Tony went to Saturday Night Live for a season and from there was in a lot of TV Series and Movies as well as being the voice of Luigi in Mario Bros.

2005 was a sadder time as Tony struggled with his mental health and his family broke up. Once better he went back to work and I am glad to report over the last few months was in a very loving relationship and appeared to be very happy.

Talking to Tony was like talking to an old friend and his love for John was palpable, yesterday when I heard the news it hurt, I know I didn't really know Tony but some people are special and the world seems a nicer place for them being in it.

My heart goes out to Tony's family, Second City Toronto, his agent Larry Goldhar, his friends and his girlfriend, Tanya, who brought so much love and happiness into his life.

RIP Tony, John will be thrilled to see you.