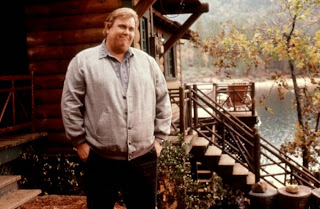 So today would have been John's 68th birthday! To commemorate and celebrate I thought I would release an edited excerpt from the book. The book is coming along slowly but surely (as usual) and I am very lucky to be working with a great team around me.

I appreciate all your patience so I thought you might like a wee snap shot of what's to come.

Happy Halloween to you all, and of course, a very Happy Birthday John - I am thinking of you today Mr Candy and I'll be raising a glass!

Lots of love to you all,
Tracey xx

PS How ace is this Uncle Buck print from Lamplight Design? It will be going on my wall as soon as I find the right frame. Go and check out their work here

Now imagine you are being chased through a wood.

It is raining heavily and you are trying to navigate your way through trees, over roots, through the terrain debris littered on the floor.

Imagine that the thing that is chasing you weighs over 800 pounds, has four legs, claws like razors, and a guttural roar that makes the ground beneath your feet shudder.

Your heart is pounding, it’s leaping out of your chest and you can hear it thumping in your head.

You slip a little.

Looking over your shoulder you can see the beast advancing. Your brow covered with sweat. You are literally running for your life.

Anyone who put themselves in this situation on purpose would - have to be a little crazy, or very dedicated to their art.

That’s exactly what John did, in one of the most memorable scenes in The Great Outdoors, and he was terrified.

Go south west of Yosemite National Park, California and it won’t be long before you hit Bass Lake Lodge, a 1940s resort that was the location for another John Candy and John Hughes classic, The Great Outdoors filmed in 1987.

Director, Howard Deutch had not met John prior to The Great Outdoors, which was originally going to be called ‘Big Country’. Hughes had convinced Deutch that he should direct the film. John was excited to play the part of Chester ‘Chet’ Ripley, a sweet family man wanting to take his wife and kids on a holiday that would get them back to nature. After reading the script John was convinced his character should have a beard covering his face, after Deutch discussed this with Universal, the feedback was “he can’t have that beard, you can’t see his face!” Hughes advised Deutch he would have to be the one to tell John the bad news, Deutch remembers “Candy was really upset about it, ‘This is my character and now this movie will always be a black spot on my soul’. He was pissed. We got off to a very rocky start because he was unhappy. However he never ever leaked that into his work, he never had an attitude, he was a fantastic person and one of my favourite people I have ever worked with. He was just an amazingly sweet man, the funniest, you can just imagine, but generous, generous, generous and always very giving to the other actors and me and everyone, but he was upset about the beard!”

The holiday for the Ripley’s, although maybe a little more rustic than they remembered (Chet and Connie went there for their honeymoon), was going ok until out of the blue Connie’s sister turns up with her arrogant investor husband and twin girls. So John is reunited with his old pal and Second City Alumni, Dan Aykroyd who plays his brother in law, Roman Craig. Aykroyd really pushed to get the part and Hughes was thrilled he wanted to be involved. According to Deutch, Candy, Hughes and Aykroyd were all very similar “Candy was from Canada and John (Hughes) from Chicago but they were definitely kindred spirits and they both had this sense of blue collared glory to them, they adored Aykroyd – he wanted to be a cop. They were their sort of people, they enjoyed smoking cigarettes and hanging out, it was everything to them, that is what they loved.”

Dan and John (Candy) got on so well, they adored each other, you would think with their improv background they may have continually gone off script, however according to Deutch they were very professional and stuck to script as much as possible. In fact Aykroyd even helped with some of the rewrites for the third act which “needed some work”.

Back to the film: For Chet this is his worst nightmare, he wanted a quiet family holiday which has now been gatecrashed by his arrogant and materialistic in-laws. Many hijinks ensue along the way; Chet accidently being dragged around the lake on water skis (he didn’t even want to water ski, he wanted to rent a pontoon boat only to be berated by Roman), late night stories of a bald headed bear (bald headed as Chet had come face to face with it on a previous visit, taken a shot and blown the hair off its head), an extremely persistent bat, pesky raccoons that seemed to torment Chet and a host of crazy characters including ‘Lightning Rod Reg’ - a man that had been struck by lightning 66 times in the head! Not to mention conquering the old 96er, ‘a 96 prime aged beef steak’ that if ordered and consumed in its entirety (including the gristle and fat), the restaurant would grant your whole party a free bill.

As the story unfolds it turns out Roman made a bad investment, is totally broke and was hoping to hit Chet up for some money. The brother in laws never really got on; however on a stormy night when the twins go missing, the two are brought together through adversity.

The twins fall down a mineshaft and can’t get out, Chet and Roman discover them, Chet encourages Roman to go down the hole to comfort his girls, whilst he goes to get some rope. Meanwhile, Roman finds out there is dynamite in the hole and manages to get the two girls out. Unbeknownst to Chet, he goes back, throws down the rope and much to his surprise helps the bald headed bear out of the shaft, only to be chased through the woods by the angry beast.

The bear was played by ‘Bart the Bear’ and John was petrified of him, however as Deutch explained to me they needed to work together, “There was one time when I had to do a shot where there was a bear in the shot (the “big bear chase me” scene lead up) and he (John), was afraid of the bears, but I had to get a shot of them both. I told him we need to do it but it will only take thirty seconds, he did it but he was mad at me. There was no CGI in those days, he had to do it for real.” I bet John had never run so fast in his life! Of course Bart the Bear was well trained. Doug and Lynne Seus, who have worked as animal trainers in Hollywood for years, rescued Bart and his sister after their mother was killed. They said, “John was so very kind to us, the lowly bear trainers in the ‘prop department’. We can't say enough good words about him. A beautiful human being.” That was typical of John, everyone on set loved him, he gave everyone the same amount of respect and love, he was always such a sweet Canadian boy at heart.

According to Deutch, it was obvious at times that John had some demons, although it never, ever affected his work, even if he had been up all night he would turn up on set with no sleep and work as hard as ever. “He ate, he drank, he would come back having not slept sometimes and that was not a secret. When my kids came to visit me once he said to them ‘whatever you want, come look in my fridge’, he took them on to his trailer and he had like five lunches in there. But the thing is he never showed those demons, he was private about it, he never ever lost his temper, never ever was a diva – never! I don’t care if he had been up for a week he would always be professional.”

This is an edited excerpt from the forthcoming biography, Searching for Candy by Tracey J. Morgan.