As well as it being John's birthday, it's also Halloween and let's face it, it ain't Halloween without Candy! I recently read that John enjoyed Halloween more than he did his birthday, he liked to make things about everyone else instead of about himself. He loved dressing up, he loved spending time with his kids, entertaining, I imagine he made Halloween just magical.

Make sure you go and watch that Candy movie today, share that meme, reminisce about your favourite movie of his, send some love in his direction.

I love some of the old traditions of Halloween. The Day of the Dead - when the astral and earth plane is meant to be at their closest, those who have passed are celebrated as it's believed they visit us. What a lovely tribute, celebrating all those we have lost with a party! Samhain is more Pagan- the thanking and welcoming of the harvest and the darker part of the year. Either way, the coming together warms my heart, and since it's John's birthday it always makes me feel a little bit closer to him too.

In tribute to John, I am just about to release a new mini-book, on 4th November via Amazon, called The A to Z of John Candy. It has been beautifully illustrated by my friend, Gary McGarvey, or Horse, (as his design company is known). My dear old friend, Joe Shooman, stepped up to edit for me again, and Rhys Perry wiped the tears and gave words of encouragement as usual, and well the result is beautiful and something that I'm very proud of. Chock full of facts and trivia, I'm hoping it is a lovely addition to any Candy fan's collection, it's worth it for the art alone. 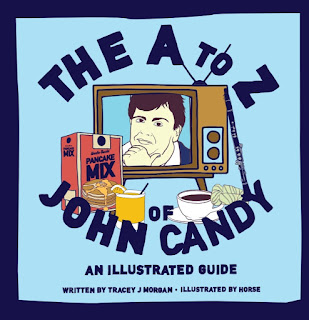 Writing The A to Z of John Candy was great fun, you'll even find some facts that aren't included in Searching For Candy. Find out about John's connection with Donald Duck, Divine stories and the secret to those Uncle Buck pancakes!

Finally, I would like to thank you for all your support this year. Usually, in John's birthday post I would mention the biography and how I hoped it would be out next year, this time I don't have to do that because it's now in existence. Thank you to all who have bought, read or reviewed it, it really means a lot.

So big love and a happy birthday to John and a Happy Halloween to everyone else.

Much love as always,
Tracey xx